New Principle for Eradicating Cancer: Leave No Dead Cells Behind 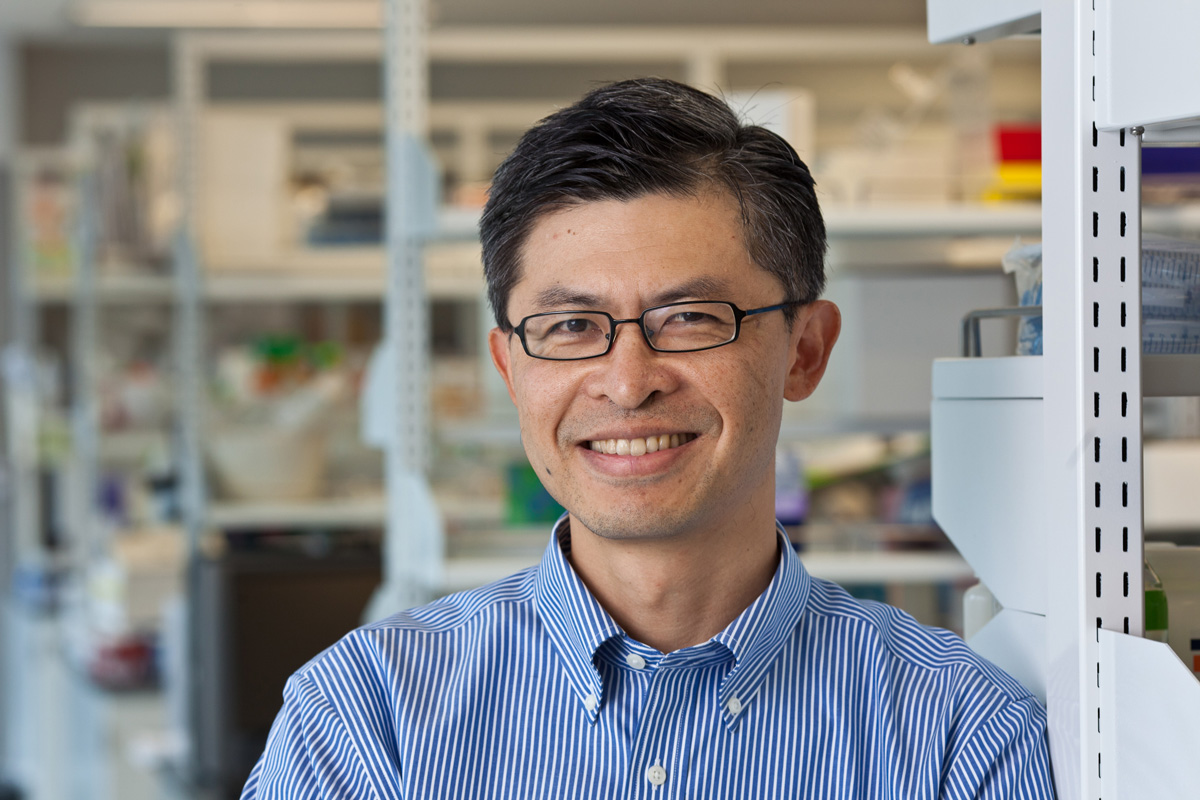 Killing cancer cells is the fundamental objective of chemotherapy, radiation and targeted cancer therapies. However, these treatments often fail to eradicate tumors, and cancer often recurs.

So, is killing the problem?

Dr. Sui Huang (pictured above), professor and cancer biologist at Institute for Systems Biology, along with former mentee and longtime collaborator Dr. Dipak Panigrahy at Beth Isreal Deaconess Medical Center in Boston and colleagues at Harvard Medical School, show that dead cells, or cell debris, generated by treatments intended to eradicate tumor cells, actually act as strong stimulators of tumor progression. Their findings were published in The Journal of Experimental Medicine on November 30.

Traditional cancer therapies, then, become a double-edged sword: Too much and too fast, yet incomplete, killing of the tumor cell population will generate so much debris that the tumor stimulatory effect overpowers the decimation of tumor cells. The dead cells trigger a reaction that strengthens the cancer cells that have just escaped death by drugs: These become more like stem cells, which are resilient and robust, and eventually cause recurrence of the tumor.

This paradoxical response to treatment is not a freak phenomenon. Huang and Panigrahy showed that such a counterintuitive behavior is actually quite common. They repeated the experiments in a variety of mouse tumor models, ranging from lung, pancreas, breast and prostate cancer to melanoma or lymphoma.

One way to create tumors in mice for experimental studies and testing drugs is to inject a number of cancer cells into the flank. But Huang and Panigrahy and their team found that if one co-injects some dead cell debris (generated in the test tube using chemotherapy) alongside tumor cells, then just 1/100 of the number of tumor cells normally used will suffice to generate a tumor that grows as vigorously a tumor as starting with 1 million cells. More strikingly, cell debris produced by the dying tumor itself as a consequence of cancer treatment, without injection of artificial cell debris, also stimulated tumor growth.

Put another way: Tumor growth can be a byproduct of cancer treatments that kill tumor cells.

But why has this paradoxical effect not previously been observed? Most drug companies and researchers test drugs in animal tumors set up to grow as quickly as possible to mimic aggressive tumors, and to save time and money. In these cases, responses to treatment are either no effect, or a slower growth that implies a drug effect.

But Huang and Panigrahy, drawing lessons of their common mentor at Harvard Medical School and cancer research pioneer, the late Dr. Judah Folkman, question scientific orthodoxy and have created animal models for slow growing or even dormant tumors. This setup opened a window to observe the tumor-stimulating effects of treatment. In these tiny tumors, treatment with chemotherapy, or even modern target-selective drugs, resulted in drastic stimulation of tumors that took off like standard aggressive tumors.

This treatment-stimulated tumor progression suggests a mechanism behind cancer recurrence following initial post-therapy remission that is more complex and sinister than the evolutionary selection and expansion of cells that are naturally drug resistant. Indeed, it indicates an active counter-response by the tissue to the presence of dead cells and the stress imparted by the treatment: The dead cells cause a local inflammation in the tumor, which is long known to promote cancer.

In Huang’s unifying theory of cancer, this is part of a much broader response. Malignant tumors disrupt normal tissue architecture, which triggers an abnormal regenerative response that is futile and fails to subside. Unlike wounded healthy tissues, tumors are wounds that do not heal and regeneration that does not stop. Unless drug treatment overwhelms the entire tumor – a rarity – it may add fuel to this vicious cycle by causing more tissue destruction in the tumor. Huang explains this counterintuitive paradoxical behavior of tumors with the dictum of philosopher Friedrich Nietzsche: “That which does not kill us makes us stronger.”

This phenomenon of cancer drugs as a double-edged sword may be considered discouraging. (Will cancer drugs then ever work?) However, knowing about new mechanisms offers new strategies for new drugs.

Cutting off inflammation has long been suspected to substantially reduce tumor incidence. Epidemiological studies have shown that daily low-dose aspirin (used to prevent secondary heart attacks) suppresses incidence for a variety of cancers by up to 30 percent. How does aspirin work so well?

In the same study, Huang and Panigrahy teamed up with Dr. Charles Serhan, an expert in inflammatory mediators – the lipid-derived cell hormones made by the tissues that govern inflammation. Most over-the-counter anti-inflammatory drugs block synthesis of one type of mediator, the inflammation-stimulating prostaglandins. However, aspirin – not ibuprofen and other synthetic OTC drugs – also triggers the synthesis of resolvin, a natural mediator derived from omega-3 fatty acids.

Serhan has previously shown that resolvin prompts a type of immune cell to eat up the dead cell debris as it terminates inflammation to end wound healing. Thus, used as cancer therapy, resolvin would clear the tissue of a potent tumor stimulator. In fact, as Panigrahy and Serhan found in this study, treatment of mice carrying debris-induced tumors with resolvin drastically blocked growth of mouse tumors that chemotherapy failed to inhibit. Combining a standard cancer cell-killing drug with the debris-removing resolvin showed maximal effect in animal tumors treated with standard drugs.

“As with wars, focusing solely on killing thy enemy may not be productive and can backfire,” Huang said. “A broad assessment of the enemy’s culture, the danger of empowering them by attacks and parallel diplomacy help. What politicians and military leaders have long learned, cancer research is now realizing: Look beyond just making killing more efficient. This new vista may open ample new opportunities for gentler, less toxic non-killing – but effective – anti-cancer drugs.”